“When I first walked into the shelter to meet them for the first time, they were in a room with several other cats. Marco actually came right up to me immediately, starting sniffing me and rubbing against me. I found Stevie in the same room, hiding in a paper bag. He looked sad (though I’ve come to realize that’s just his normal face) and I knew I couldn’t leave them there.”

About six years ago, Jen Mahdi found herself wandering the cat adoption space at SPCA Tampa Bay. She had heard, from a friend, about a special pair of felines at the shelter and had to come see them for herself.

The two cats, named Scoopy and Spooky at the time, were surrendered as a bonded pair when their previous owner was no longer able to care for them. Scoopy, being blind, heavily depended on his friend Spooky and could not imagine life without him. It would take a very special adopter to open up their home to both of these boys. Jen was that very special adopter.

Stevie and Marco (formerly known as Scoopy and Spooky) were available for adoption in 2016.

When did you adopt them? How long have they been a part of your family?

“They were adopted in October 2016 and have been an irreplaceable part of my family ever since.” 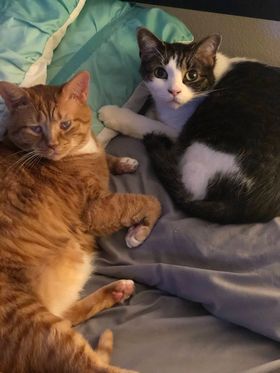 Are their names the same as their shelter names? If not, what are their new names?

My blind, orange kitty was renamed Stevie (as in Stevie Wonder) and his buddy was renamed Marco (as in Marco Polo) for his love of exploring.

What drew you to adopting them? How did you find out about them?

“A friend of mine shared a video of them posted by the SPCA. I had been considering getting a pet at that time and figured I’d go visit them. I took them both home that day!

When I first walked into the shelter to meet them for the first time, they were in a room with several other cats. Marco actually came right up to me immediately, starting sniffing me and rubbing against me. I found Stevie in the same room, hiding in a paper bag. He looked sad (though I’ve come to realize that’s just his normal face) and I knew I couldn’t leave them there.”

How has your life changed since adopting them?

“They’ve been a part of several very big moments in my life…Since adopting them, I’ve gotten married, moved from Tampa Bay to Canada (with the kitties, of course), and now have a 3 month old baby.” 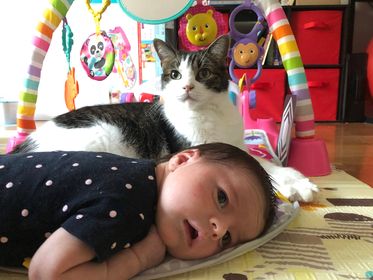 “Getting pet while lying on the couch or in bed & playing with their toys.” 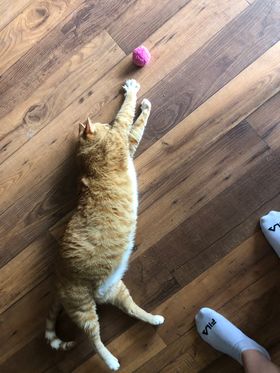 Stevie deciding whether to lounge or play ball.

What are some of their favorite things?

“They both love laying in the sun! In Florida, they particularly loved watching rabbits from the lanai. In Canada, they love going up and down the stairs and their huge cat tree, even Stevie finds his way!” 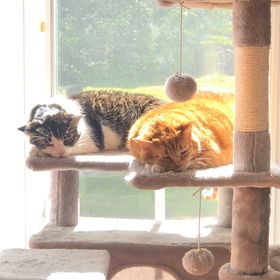 Marco (left) and Stevie (right) soaking up some Florida sun.

Do you have other pets? If so, how does the boys get along with them? What is their relationship like?

“No other pets. Don’t plan on any more for a while.”

What things are you looking forward to in your future with your boys?

“Looking forward to watching my baby grow up with them. I’m sure they’ll be instant best friends as soon as she’s old enough to pet them.”

Anything else that we should know about the boys and your family?

“I’m glad these two ended up becoming a part of my family!” 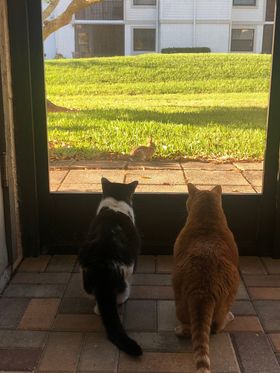