“We were a little hesitant with owning a bunny since we never had one before but we are so glad we went ahead and adopted Jagger. We absolutely LOVE him and having him be part of our family!” 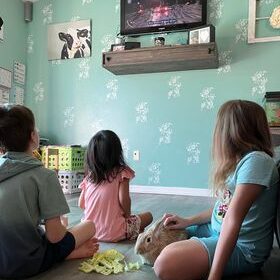 Turkey the rabbit, now known as Jagger Sir Bunnington, found his fur-ever home with Vanessa Vander Veen back in June of this year. Our SPCATB Marketing Team recently followed up with his new family to hear more about his “hoppily-ever after”.

What drew you to adopting Jagger? How did you find out about him?

“We actually saw Jagger on the website and went to adopt him. We thought he was adorable and with this being our first bunny he seemed very calm and gentle.” 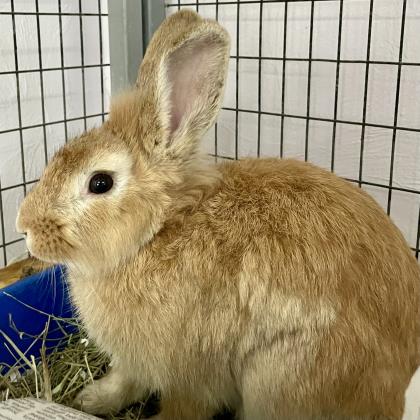 How has your life changed since adopting Jagger?

“We absolutely LOVE having Jagger in the family. Watching him hop around the house and following our other pets around is so cute.” 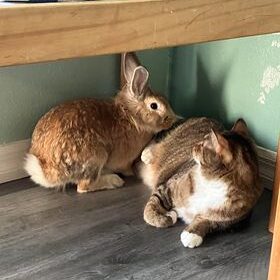 Jagger gets lots of free time and snuggles, he actually loves to rest at the top of your chest with his head on your shoulder and get loved on.”

What are some of Jagger’s favorite things?

“He loves his fresh veggies and hopping around the house. He even loves our Great Dane pup.” 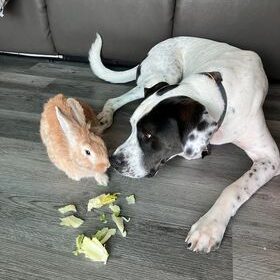 Jagger and his new best friend.

Do you have other pets? If so, how does Jagger get along with them? What is their relationship like?

“We have 2 cats and 2 dogs, one which is a Great Dane mix and they all love Jagger. Surprisingly Jagger wasn’t afraid of them and enjoys hopping around the pups.” 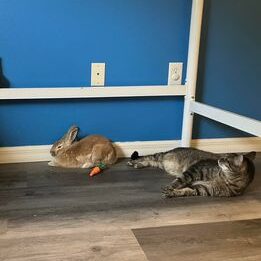 Anything else that we should know about Jagger and your family?

“We were a little hesitant with owning a bunny since we never had one before but we are so glad we went ahead and adopted Jagger. We absolutely LOVE him and having him be part of our family!”

Congratulations again, Jagger! Wishing you and your family a future full of more wonderful memories together.