Hurricanes are a part of life on the Gulf Coast. While many come and go each year, there are those that change life as we know it. Thomas Murphy survived one such hurricane; this fierce storm was named “Katrina”. The devastating impact of a hurricane can be even heavier for those with pets, as was the case with Thomas and his cat, Cousin.

Several years ago a litter was born to a stray cat behind our house. Most of the litter survived and stayed in our area. Among them was a sort of overgrown male tabby cat that I called “Cousin.” I first used the name to describe his relationship to other litters of cats born around our house. The name stuck.

I had never been a cat lover until about 10 years ago when our daughter and family moved to Africa to do missionary work. We took their cat named Cottontail Elise Starlight. From there to now we increasingly became “cat lovers.”

Cousin, though an outside cat, adopted us. From an early age, though larger than the other cats in his litter, he displayed no aggressiveness or fear. Though he did love squirrels and was a very good hunter, he never even extended his claws towards us. He was very mild mannered not only to us but to anyone who showed him any attention. In the mornings, when I went outside to get the daily Times-Picayune newspaper, Cousin would be right by the front door in the welcome mat. I would always warmly greet him and get the paper. He would then follow me into the house to get some fish food. When he finished his food he would lead me to the front door to return to the outside. 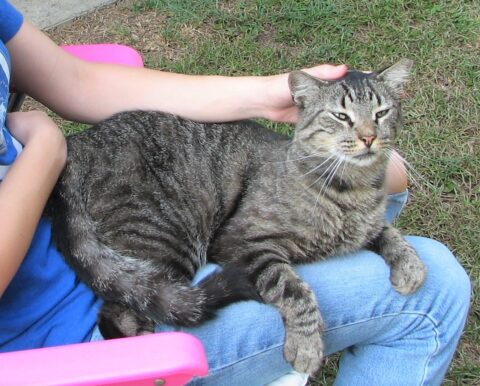 Cousin enjoying the lap of one of his human companions.

Our neighbors, the Lizarragas, were very kind and generous to the stray cats, providing food, neutering, and special veterinary attention when it was needed. They were a strong, but not pushy, influence in our cat appreciation. When we left the house to run errands, Cousin was generally there to tell us “Bye.” When we returned, he was there in the driveway, frequently sleeping on the front deck of the boat. Occasionally he would bring an offering of leftover squirrel, depositing it right by the door of the
house.

On August 28, 2005, a menacing hurricane called Katrina, approached New Orleans calling for a mandatory evacuation. As Belinda and I made final arrangement to leave the city in our 93 Dodge pickup truck, it became obvious that with our meager possession plus two dogs and two
inside cats, we would have to leave Cousin behind. We were under the impression that our neighbor would rescue him and the other outside cats. It happened that they were not able to locate the cats, and they were left to the fury of the hurricane. I felt that I was abandoning a special friend, and after the storm and its aftermath became reality, I felt a tremendous sense of guilt and grief in leaving Cousin behind. I knew he could not survive.

That night, and the next day, August 29, New Orleans and the region experienced a storm unlike any other ever known for this region. In addition to the initial ferocious winds, floods covered the city killing over 1000 in New Orleans alone. Our house had water to the ceiling, which remained two weeks before beginning to recede. 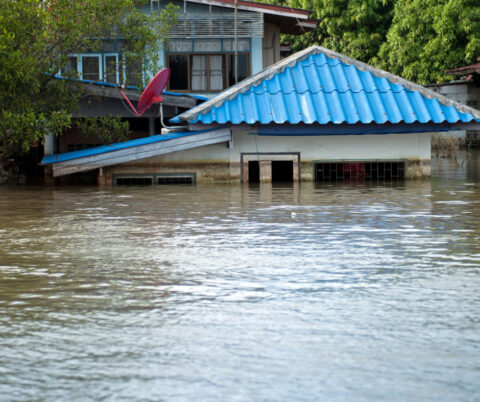 Devastating floods and dangerous conditions during hurricane Katrina forced residents from their homes.

Residents of our area of the 9th Ward were allowed to return to view our house on October 5. Belinda and I arrived on Downman Road at 5:30 A.M. The area was total darkness. There was not one light to be seen–anywhere except in the sky. There was not another car in the area. It
was like we were on another planet–very weird. Trees uprooted. Boats on the side of the road. I think the National Guard was responsible for clearing the streets so cars could navigate to the owners houses.

It took us a couple of hours to be able to get into the house. There were no other sounds. No cars. No birds. Silence.

About 11 A.M., as we were loading a few salvageable things into the back of the truck, we heard a mild “meow” in the front yard. We could not see the source of the sound, for the yard was completely filled with trees and limbs. Then another “meow.” It was Cousin! He proceeded very
cautiously, step by step, giving clear evidence of his traumatic days of trying to survive on housetops and treetops, not to mention going through the wicked winds and rains of the storm.

I called, but he hesitated. Then I remembered that I saw some canned cat food in the garage. I got as close to him as he would allow and poured out the can. He inched up to the food and ate all of it. I got another can for him, and he ate most of it. I then tried to find something to hold fresh
water. I don’t know how he survived on the polluted salt water that was the only water available.

After a while he began to recognize us and allowed us to hold him, pet him, and “love on him.” At 2 P.M. we finished doing all we could do and left to return to Columbus, Mississippi, where we are presently living. Belinda said, “Tommy, let me drive. I’m afraid COUSIN WILL SCRATCH ME!” She drove, and I held Cousin. It was a new experience for him. He meowed quite a bit for the first couple of hours, and then he began to settle into his new routine.

He is adjusting really well to his new home. He still goes to the door wanting some outside experience. We have a lot of squirrels that I know he would like to eat. 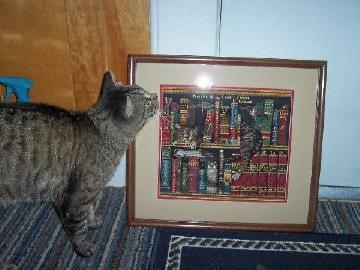 Framed picture given to Cousin from Jackie and Bob Bembenek. The caption on the picture says: “Dedicated to ‘Cousin’–Katrina Survivor.” The titles of the books are books for cats only such as: Rat Hole, The Giant Rogent, Puss “N” Boots, Great Mouse Trap, Wharf Rats, Great Bird Nests, etc.

*Cousin’s story is a reminder to us all that hurricanes are inevitable, so be prepared and have a plan for hurricane season. Visit our blog on hurricane preparedness for pets for resources on how to create your hurricane safety plan.

SPCA Tampa Bay’s “Heart of Humanimality” series features compelling stories of the human and animal connection. The bond between humans and animals brings a joy like no other. As community advocates for the humane treatment of all animals, we work to bring more of this joy to people and pets throughout Tampa Bay. Each story in this series showcases the unique bond between human and animal, and this bond is what evoked the creation of our term “Humanimality”. Please join us in spreading the Humanimality!

About the Author: Thomas “Tommy” Jefferson Murphy and his wife Belinda relocated to Columbus, MS in 2005 after hurricane Katrina wreaked havoc upon their previous home in New Orleans. As a retired pastor, his faith and his family are what Mr. Murphy holds most dear in his heart. Tommy and Belinda have been married for 66 years and together have 4 children, 11 grandchildren, and 6 great grandchildren. They continue to work hard daily: Tommy tending to the gardens, chickens, and home repairs, while Belinda whips up delicious meals to share with friends and neighbors. 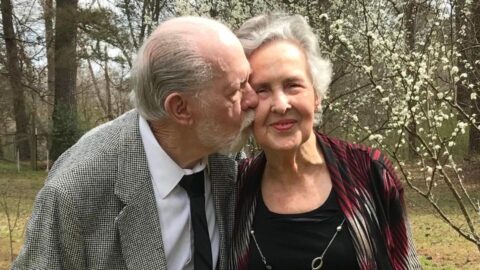