Every animal that comes into our SPCA Tampa Bay Veterinary Center has a story. Many times, we are so focused on the task at hand; evaluation of the pet, diagnosis, and treatment of the problem, that we don’t always have a chance to have those in-depth conversations. Fortunately, I had the opportunity to speak with one of our clients about his cat, Smokey, and was touched to learn how this cat was here with us today because of his owner’s kindness and generosity towards animals.

Smokey’s story begins several years ago when his human, George, noticed a skittish female cat hanging around the perimeter of property. She was clearly feral and would not come near the house, even when offered food. George began tossing pieces of chicken from his own meals to her daily in hopes of earning her trust. While it took some time before she realized that this human was throwing food to her and not at her, she began to understand George’s intentions and would run over to the food and eat readily.

After several months of nurturing this friendship, the once feral cat was comfortable enough to venture inside the home for food as long as George kept his distance. One rainy day, George looked around for his friend to offer her shelter, but she was nowhere to be found. With the weather getting worse, he was concerned for the cat’s safety. Just as he was about to give up hope, George noticed movement out of the corner of his eye and saw his cat jump up on the porch carrying something in her mouth. She held what George believed to be a partially hairless, deceased rat that the cat had brought to him as a gift. After retrieving a pair of gloves to remove the animal, George picked it up and was shocked when it managed to squeak out the tiniest “meow”. This offering was not a rodent, but an incredibly emaciated and dehydrated four week old kitten. George recalled that the kitten was missing half of its fur and was so thin that “every bone, every tendon, in its body was visible”. Even more incredibly, George does not believe that this kitten belong to the feral cat, but that she found it and brought it to the one person that she trusted.

George had the quick thinking to soak some cat food in warm water, not knowing if the kitten was old enough to eat solid food. As soon as he put the food down, the tiny cat began to eat ravenously. While the chances of survival for this tiny, weak kitten seemed poor, over time George was miraculously able to nurse her back to health. This sickly kitten that defied the odds and survived grew into a healthy adult cat. She later had kittens of her own, one of which George named Smokey. Through his kindness to this feral cat and the baby that she found, he was blessed with his new cat friend. 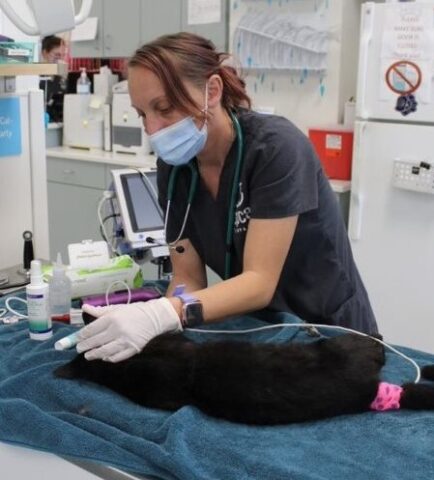 Unfortunately, Smokey was recently attacked by an animal outside and suffered severe injury to one of his front legs. His leg had multiple puncture wounds and became extremely swollen, and he was struggling to bear weight on the leg. Smokey’s owner had fallen on hard times but knew that medical attention was necessary, so contacted the SPCA Tampa Bay Veterinary Center in hopes of finding help for his feline friend. George applied and qualified for the Caldwell Keeping Families Together (KFT) program, a grant funded program geared towards low-income families that assists with payment of veterinary bills.

While Smokey was extremely nervous at the Vet Center, the vet team was able to sedate, shave, and clean the wounds and administer antibiotics and pain medications. In addition to the treatment of his wounds and infection, Smokey was also neutered.  Intact male cats live to fight and mate, which are leading sources of disease transmission in cats.  By neutering Smokey, his chances of getting wounded in a fight or contracting disease in the future are greatly reduced. Neutering would also prevent him from contributing to the feral cat populations, saving countless lives from the same fate that his relatives endured. 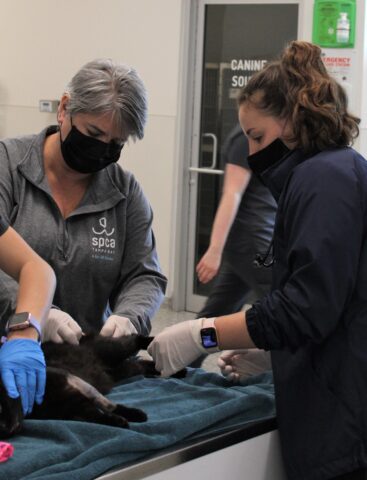 Doctors Mitchell and Schiess evaluate Smokey’s leg while he is under anesthesia.

Smokey was just in for his two week post-operative recheck, and his Doctor and staff were amazed at how well he is doing! The massive swelling had fully subsided, and the wounds almost completely healed. George even stated that Smokey has decided to become a homebody since his last visit, only venturing outside for an hour or so a day. Apparently being a housecat isn’t so bad after all! Smokey’s dad expressed his gratitude for the assistance provided by the SPCA Tampa Bay Vet Center in getting Smokey back to his old self, and we deeply appreciate the kindness and care that George has shown to many animals throughout the years. 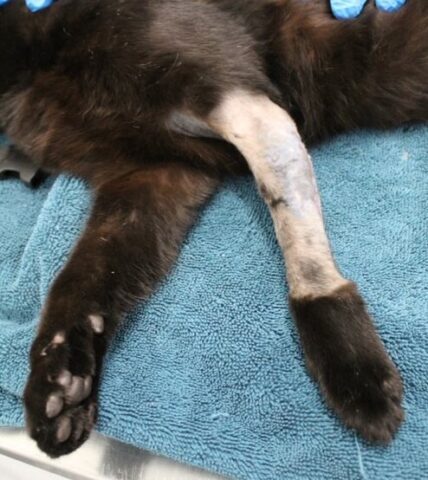 Two weeks after his initial visit, Smokey’s leg has healed exceptionally well. The swelling has fully subsided and the wounds have closed.

SPCA Tampa Bay’s “Heart of Humanimality” series features compelling stories of the human and animal connection. The bond between humans and animals brings a joy like no other. As community advocates for the humane treatment of all animals, we work to bring more of this joy to people and pets throughout Tampa Bay. Each story in this series showcases the unique bond between human and animal, and this bond is what evoked the creation of our term “Humanimality”. Please join us in spreading the Humanimality!