The update you’ve all been waiting for… The Backstreet Kittens will be available for adoption on Wednesday, December 21!  If you’d like to adopt one of the Backstreet Kittens, we recommend lining up in your car at the gate to arrive right when our doors open on Wednesday afternoon at 1:00 p.m. All adoptions are first come, first served in person at SPCA Tampa Bay. 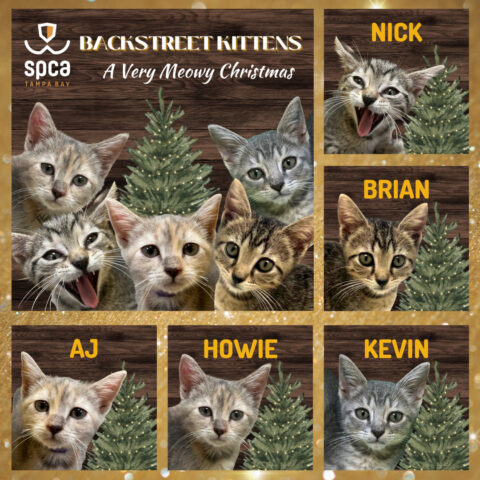 SPCA Tampa Bay is getting in the holiday spirit by naming a litter of five adoptable kittens after Jingle Ball headliners, the Backstreet Boys! These five Backstreet kittens, named Nick, Brian, AJ, Howie, and Kevin have quite the backstory.

A gentleman working on a construction site came in to the SPCA Tampa Bay Veterinary Center with a litter of kittens that were found inside of a large piece of construction equipment (tell me why) that had just arrived to St. Petersburg from Sarasota. The construction team heard their tiny meows and were shocked that these babies had traveled such a far distance before being discovered. The kittens were immediately evaluated by the veterinary team and after receiving a clean bill of health (alright!), they were sent to SPCA Tampa Bay’s For-All shelter in Largo to be placed with a foster volunteer.

After spending the last month with their foster family, the kitten’s individual personalities have really started to shine! Nick is the instigator of the litter, always trying to get his brothers and sister to play. Brian is the silly one, he loves to frolic and investigate. AJ holds her own as the only female in the litter, she is curious and adventurous. Howie is very sweet, he likes to lounge in your lap and cuddle. Kevin is a bit on the reserved side, he loves to climb and snuggle up with his siblings.

These Backstreet kittens are now eight weeks old and will be ready to find their forever homes in mid-December, just in time for the 93.3 FLZ Jingle Ball! If you’re interested in adopting your own Backstreet kitten from SPCA Tampa Bay, keep an eye on spcatampabay.org or SPCA Tampa Bay’s official social media channels in the coming weeks for an official announcement of when the kittens will be available.

And to the Backstreet Boys, SPCA Tampa Bay invites you to make it A Very Backstreet Christmas by visiting the animal shelter when you are in town to meet your namesakes!

The Backstreet Boys are a vocal harmony group that recently released their tenth studio album and first Christmas album titled “A Very Backstreet Christmas” and are currently headlining 93.3 FLZ Jingle Ball. You can see the Backstreet Boys, along with Black Eyed Peas, Big Time Rush, Cheat Codes, Tate McRae, Ava Max, Jax, and Nicky Youre on December 16 at 7 p.m. at Amalie Arena.